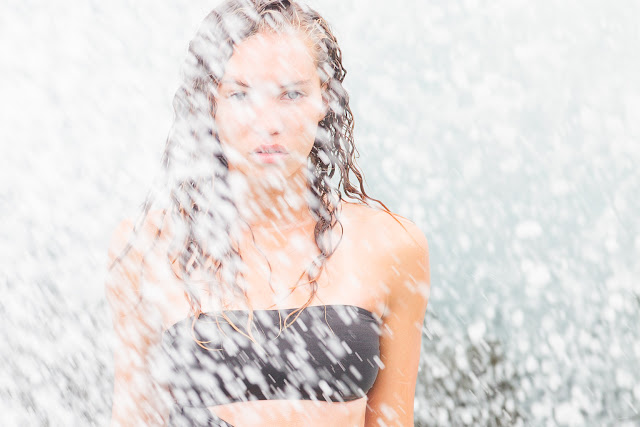 This shoot took place a couple of weeks ago in early September when Hurricane Leslie threatened to hit the island.  The shoot was on Saturday, the storm was estimated to hit the island on Sunday, fortunately it changed its path and missed well to the East.  What it did do though, was create some nice storm surge, perfect for a quick unplanned shoot.

On Friday night I put out a Facebook post asking if anyone was up for a hurricane shoot and Sophie replied.

It takes a special kind of model to shoot in hurricane surf, someone who's not afraid of big waves and isn't phased by a few bumps, bruises, grazes and some small cuts.  Sophie is a lifeguard, so well accustomed to being in strong waves, and she took the bumps and bruises in her stride.  The cuts on the other hand were enough to stop the shoot, but we'd got enough good shots by then LOL.   And after a couple of Bandaids had stopped the bleeding, she was fine.

Shooting in hurricane surf is a lot more of a risk than a normal shoot.   Number one priority is obviously not to put the model in harms way, but at the same time if you want to get spectacular shots then she has to get close the the water.   I like to find a location where there a natural barrier between the model and the water, the perfect location is one where the force of the waves are halted by the barrier and there is a spill over of water that isn't too strong to put the model in danger (other than falling over and getting a few bumps).   When I find a location that looks plausible I like to watch it for at least 5 minutes to see where the most extreme waves are reaching and whether they would be suitable for the shoot.  I then position the model at the very edge of where the extreme waves are reaching.

The second thing to consider is the equipment, some of these waves can give off a lot of spray that will soak you and your equipment.   In theory if the model is positioned at the very edge of the most extreme wave then that means  I'm going to be outside of the range of the waves, but as I experienced in 2010 there's always the rogue wave that comes out of nowhere.  RIP 5D mkii.

For this shoot I covered the 1D mk iv in 2 clear plastic bags that were duct taped to the lens.   My Einstein strobes cant be covered in plastic bags as they need air circulation and they are also too bulky to cover.  So I chose to use a speedlight that is much smaller and easier to protect.  As I didn't have an assistant for this shoot I decided not to use the beauty dish as I didn't want it blowing over in the wind, so I settled for 1 speedlight inside 2 clear plastic bags, attached to a pocket wizard and mounted on a light stand.

This first pic is an unedited image that's simply to show the first location that we used.  The image shows how location looked for 95% of the time, quite calm really.    There is a lot of standing around waiting for a big wave to break over the rocks, but as you will see from the edited pics when they eventually break they are quite impressive.


Unedited Image showing the first location before a wave hits. 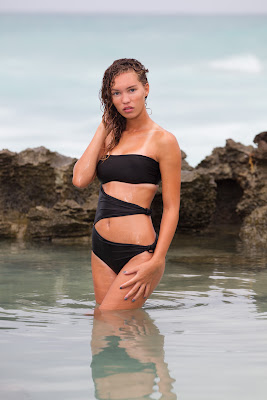 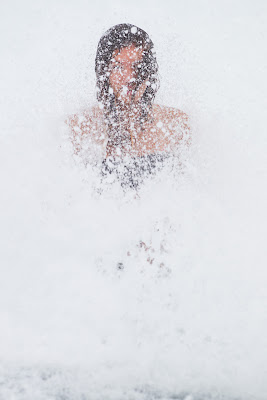 Ok here are the Edited pics from the shoot. 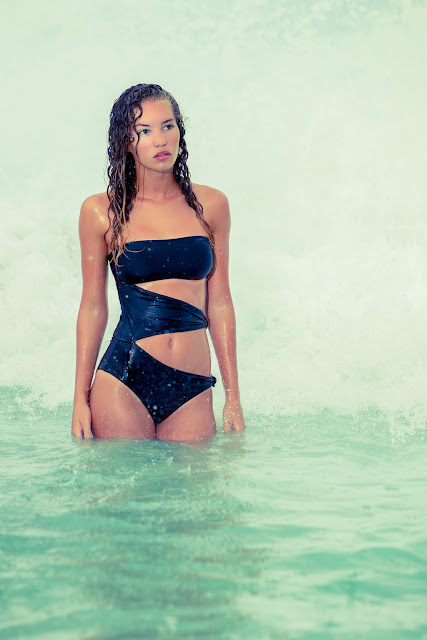 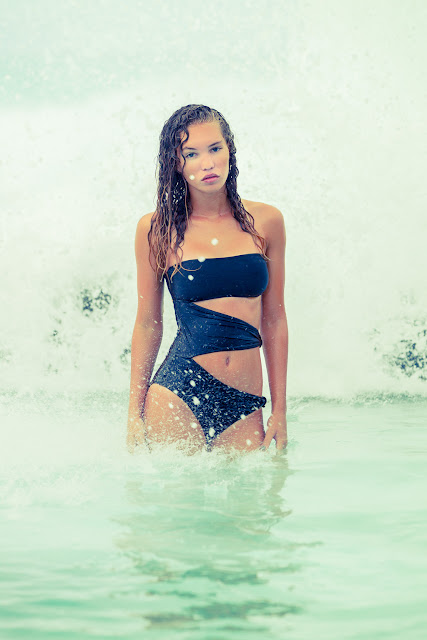 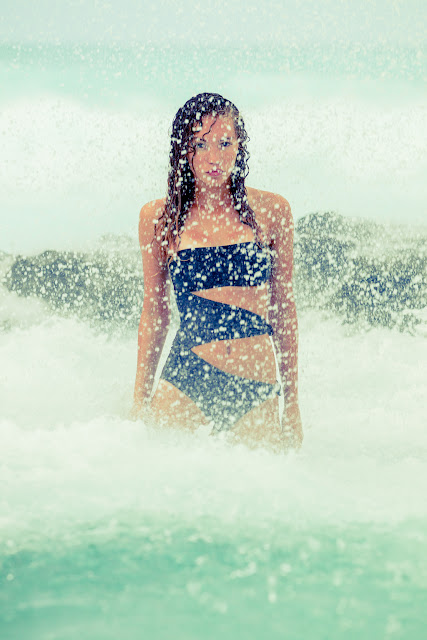 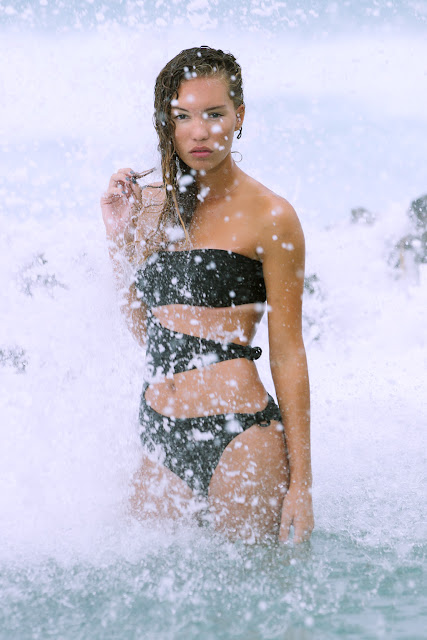 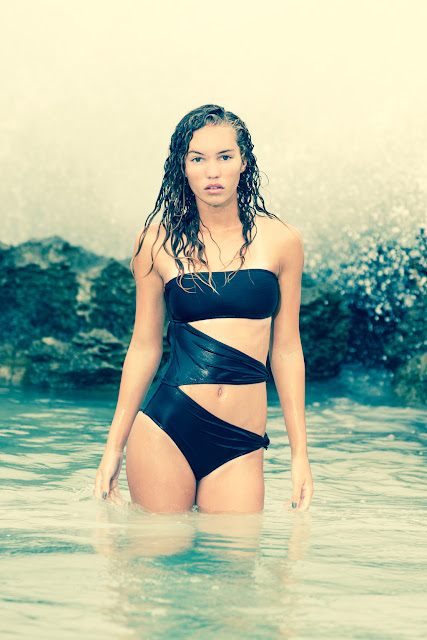 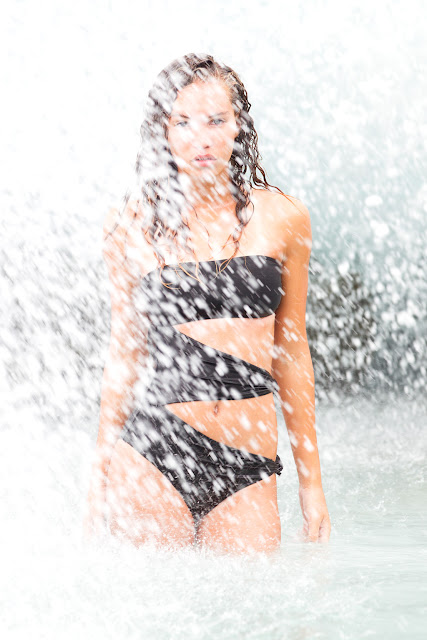 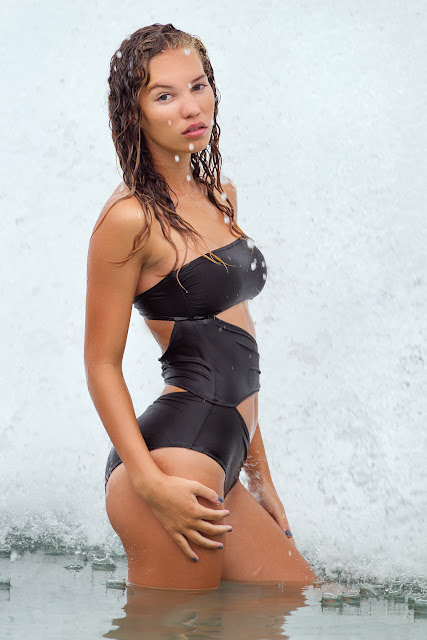 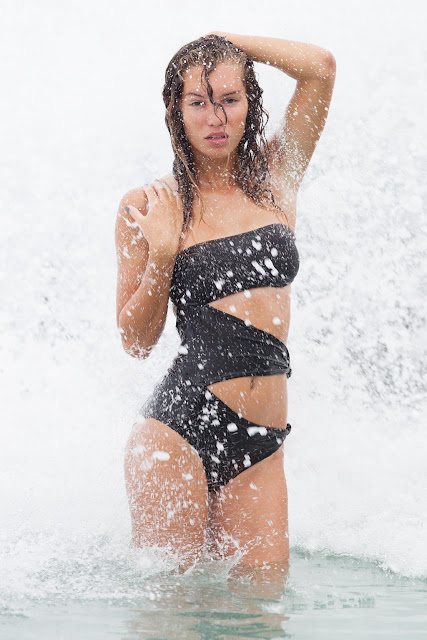 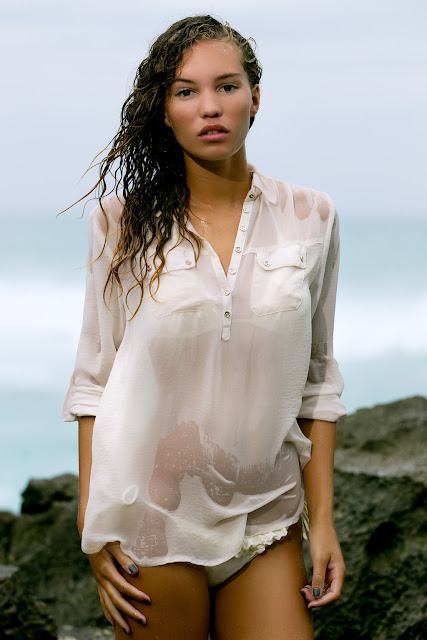 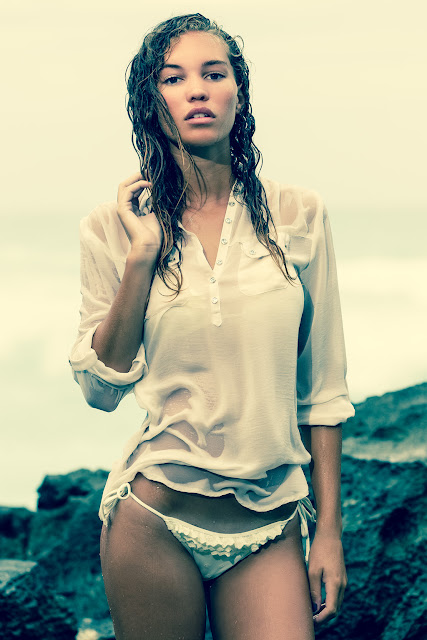 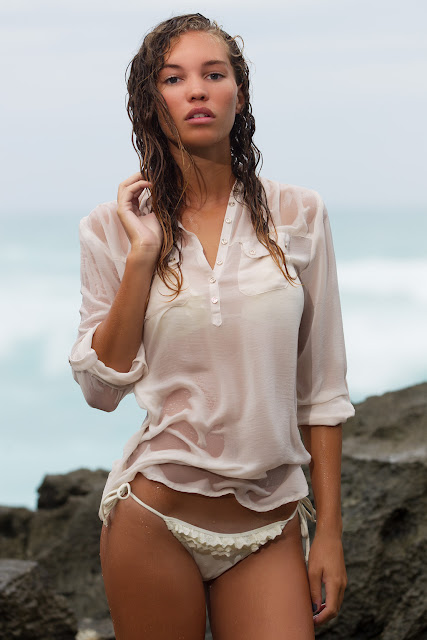 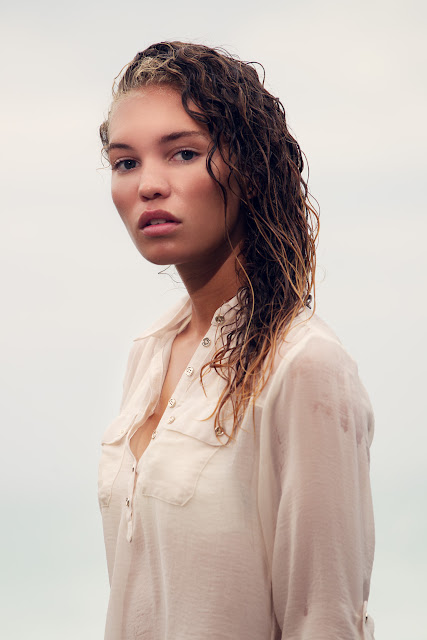 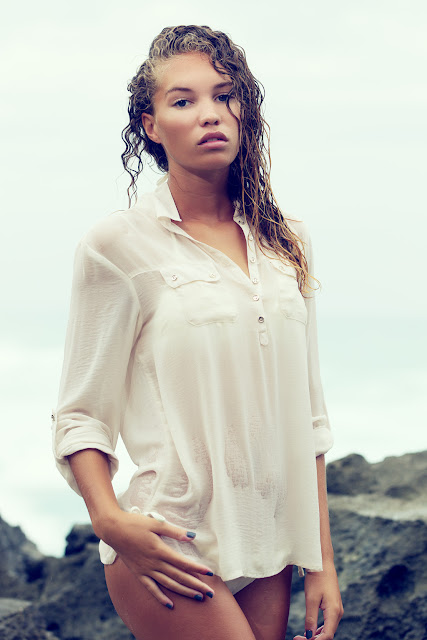 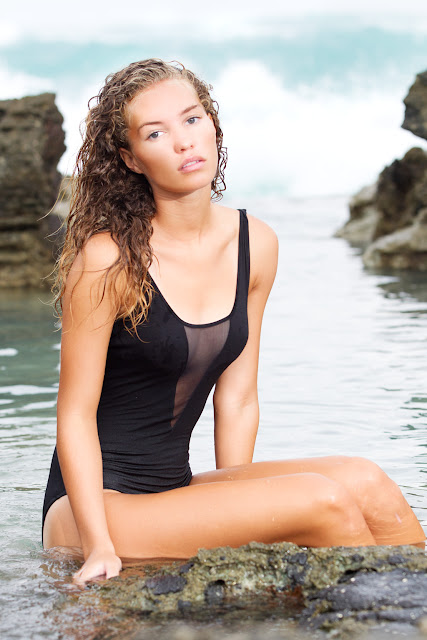 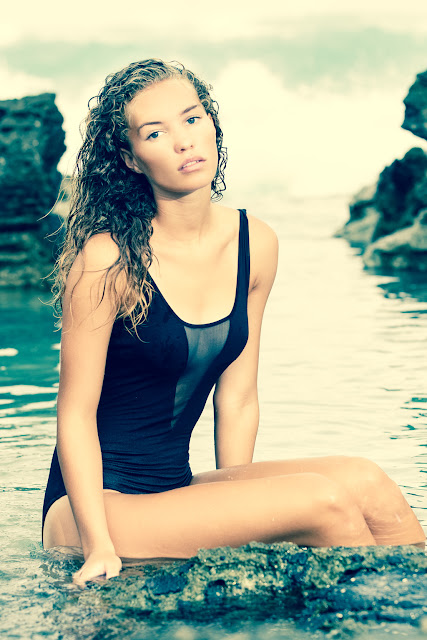 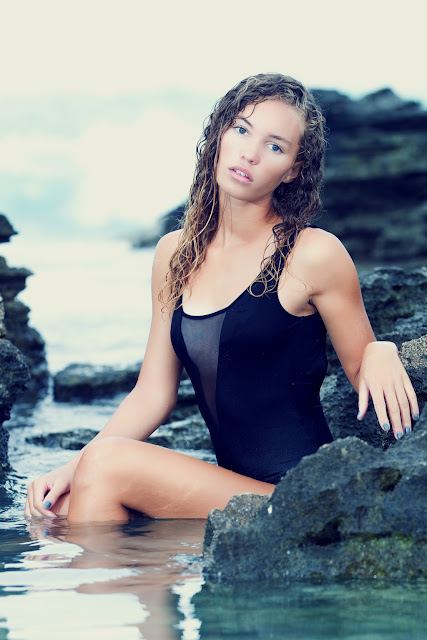 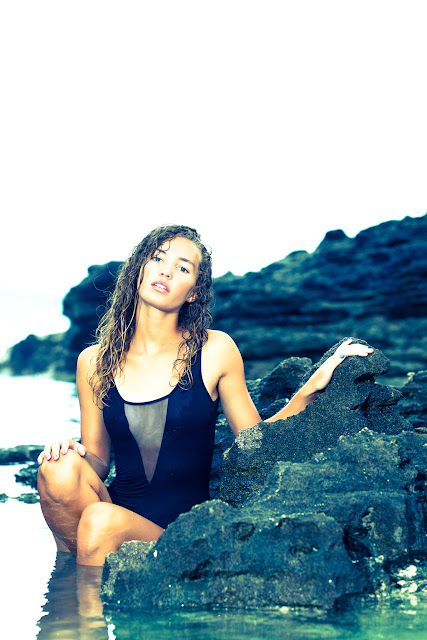 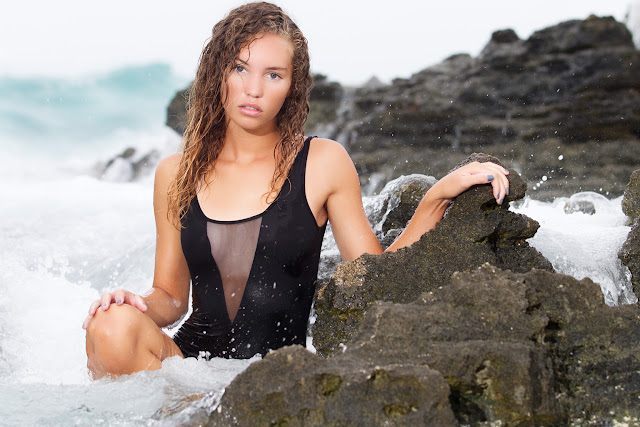 BLOOPERS
No Hurricane shoot can be complete without a few Bloopers.  Enjoy :D 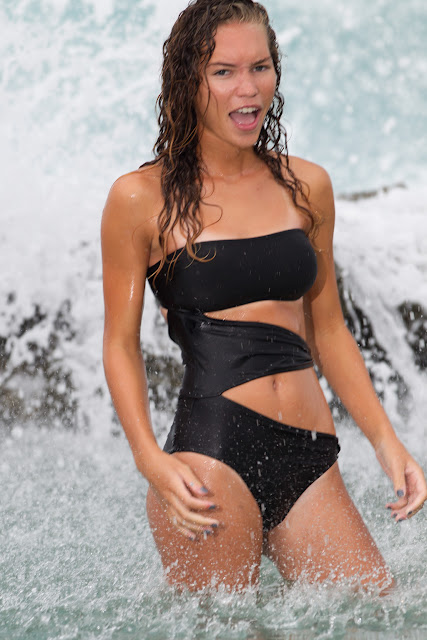 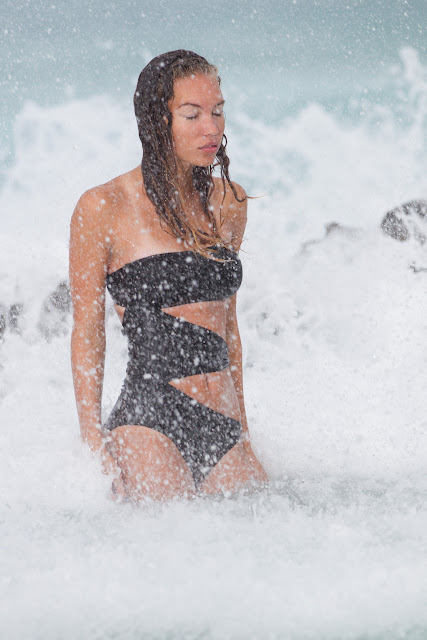 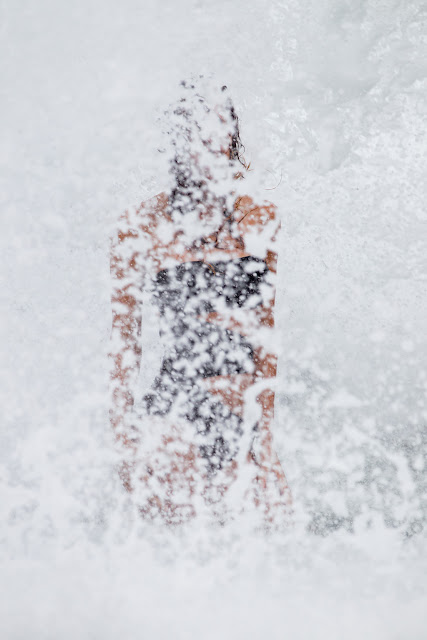 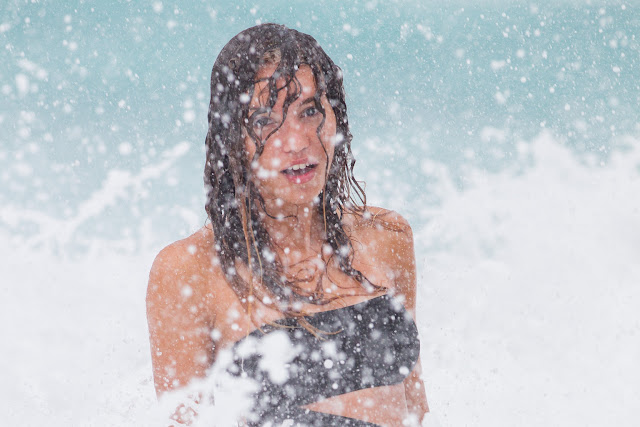 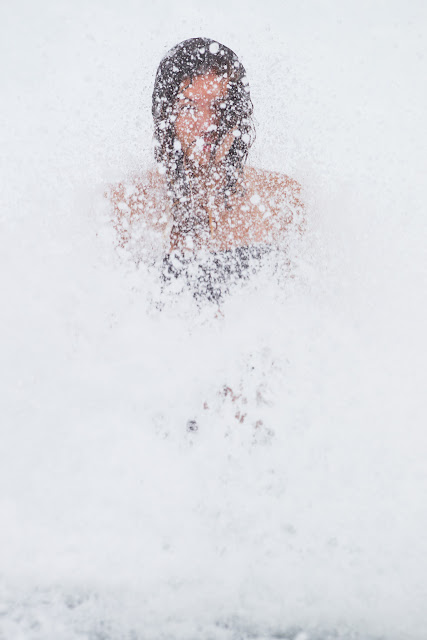 This was the last shot, resulting in Sophie getting washed through the rock channel and cutting her hand and leg.  Whoopsie  :O 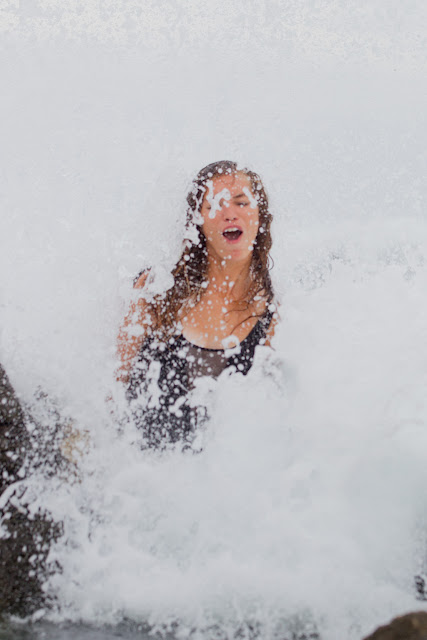