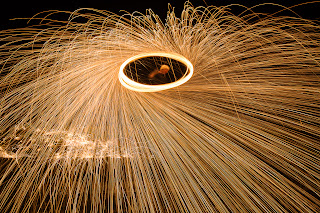 Last weekend I got invited to a photographers get together with 3 photographers, that a few days earlier I wasnt even aware of.  These guys (Jack Thomas, Chris Ingham and Adrian Cunningham) are amateur photographers who have been experimenting with night photography, shooting with long exposures, light painting and also shooting fire in various forms.  I saw some of their work and when I asked how the shot was executed, Jack told me that they had another shoot planned on the upcoming Saturday and I was welcome to come along and see for myself.

The location for the get together was at Whale Bay Fort and when I arrived Chris was in the process of shooting his model, Anna.  Chris was looking to use fire sparks as a backdrop and in the foreground add a model.  He is new to lighting and shooting models so I offered to assist with the model lighting. 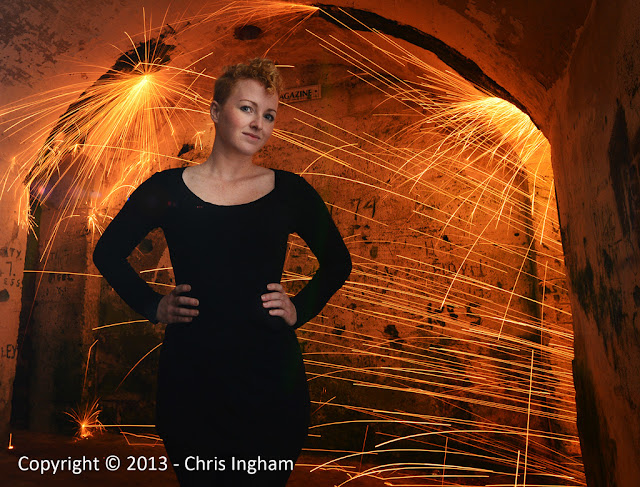 Chris has kindly agreed for me to use some of his images in this blog.  All images with Chris's name on them belong to him, all other images are taken by me.
The shot above, was from the first shoot we did and was inside one of the large rooms.  The only light source that Chris has is a speedlight.   As the light is small the shadows that it creates are hard and not particularly flattering.  I suggested that Chris bounce the flash off the rear wall to create a larger light source and a softer shadow on Anna.  The first tests resulted in a nicer light on Anna but too much light was falling onto the background wall which needed to be dark so that it could be lit from the sparks. 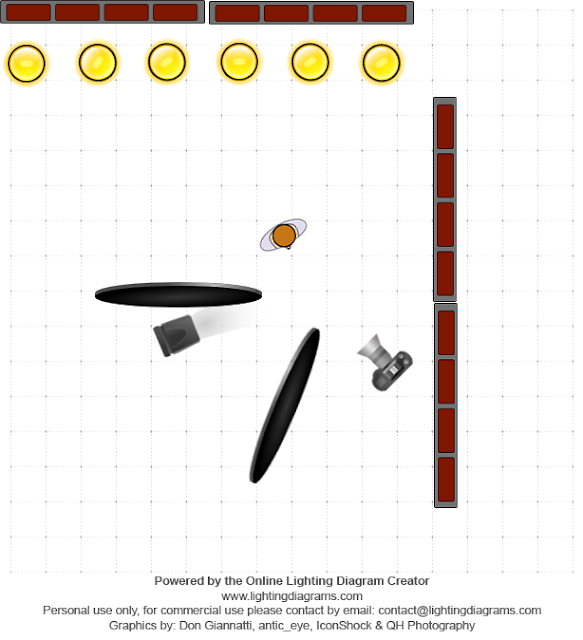 The lighting diagram above is the final set up.   After deciding not bounce the flash off the rear wall we tried bouncing it off the side wall.    This solution worked but also gave a couple of new problems.  Firstly light from the flash was hitting the model and due to the close distance between model and light it was too bright and distracting.   The solution was to flag the flash so that no light spilled onto the model, only onto the wall.   The second problem was that the light from the flash was falling onto the front of the lens and causing flare.  The solution was to also flag the lens.


The sparks were created by Bob Vaughan.  They are created from burning steel wool.  The steel wool is lit using a 9 volt battery and then placed inside a steel mesh globe.   The globe is attached to a rope and spun vigorously.  The sparks are caused by the burning wool breaking up and being thrown out of the globe through the centrifugal force generated from the spinning motion.  They appear as long streaks due to the long exposure speed.
Since the diagram software doesn't have fire as one of its icons I used tungsten bulbs to represent the sparks.  (In post, I added a little dodge and burn to shape the face and enhance the contrast)

The second location was in a corridor.  There was no rear wall in the corridor so we tried to bounce the flash off a reflector, however, due to the small amount of room to work with, the resulting bounced light was still small and gave an unflattering shadow under Anna's chin.  After several failed experiments I went and got my beauty dish from the car.  The beauty dish is designed for Einsteins so we improvised and handheld the speedlight in the back of the beauty dish.  As expected the beauty dish solved the problem and gave a beautiful light on Anna. 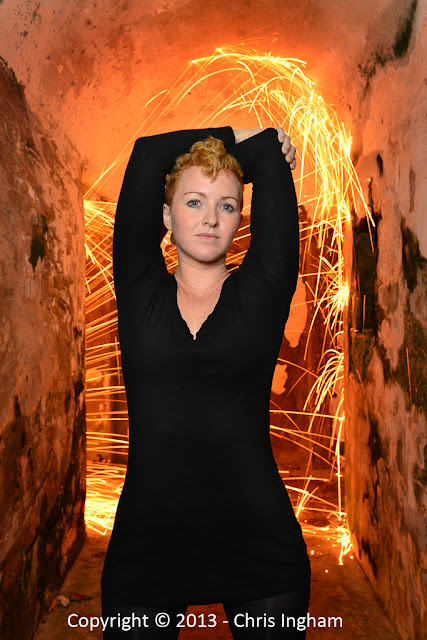 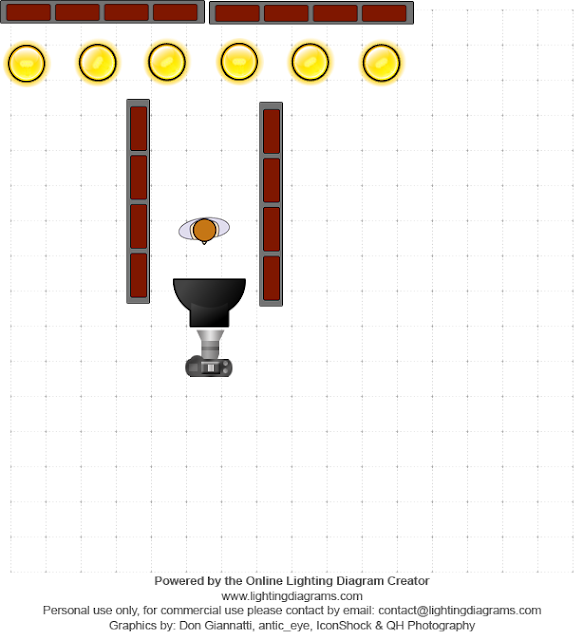 After we finished shooting Anna we met up with some fire breathers that Chris had invited.
Here are the images from that shoot. 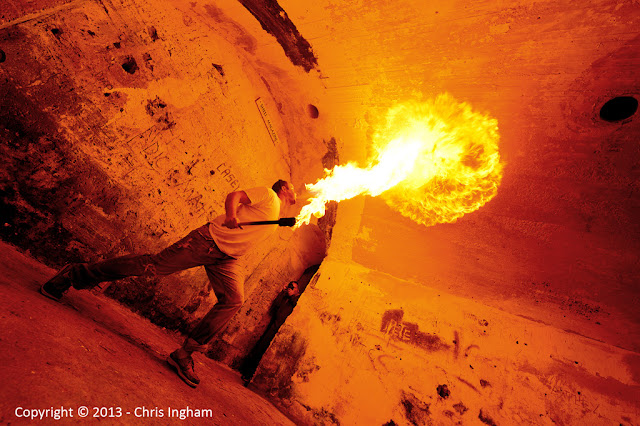 The Remaining images are taken by me. 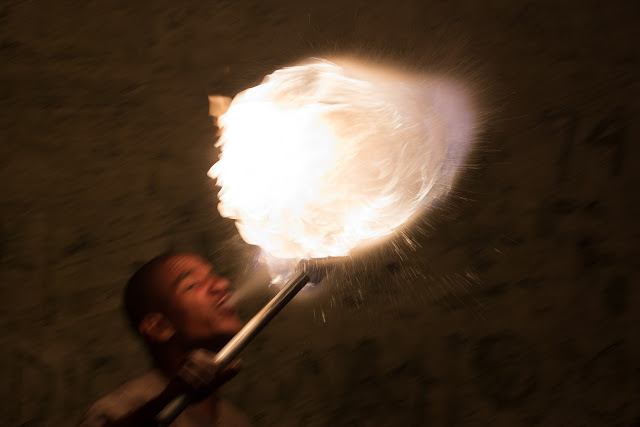 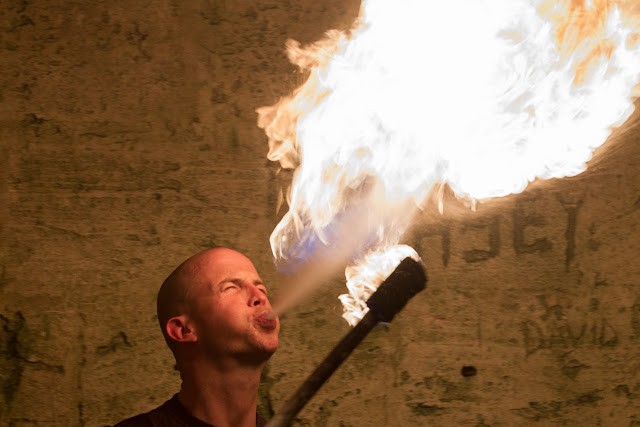 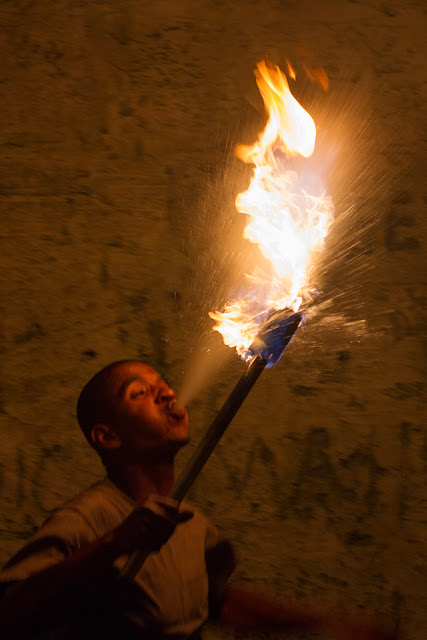 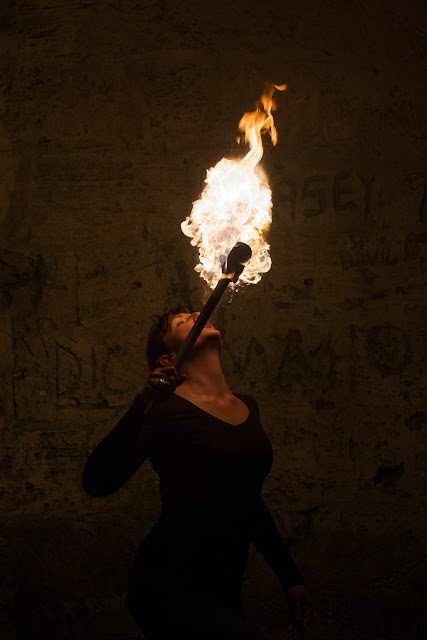 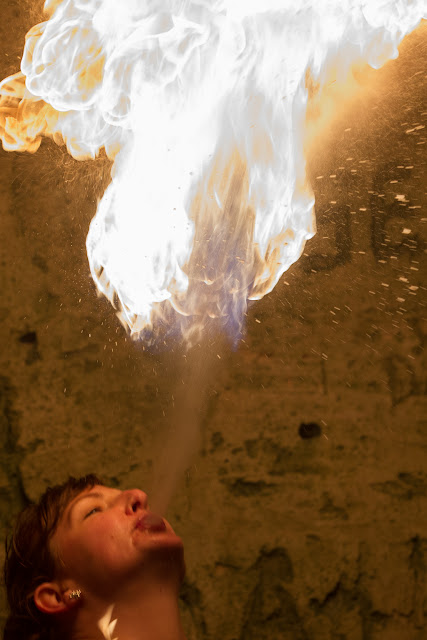 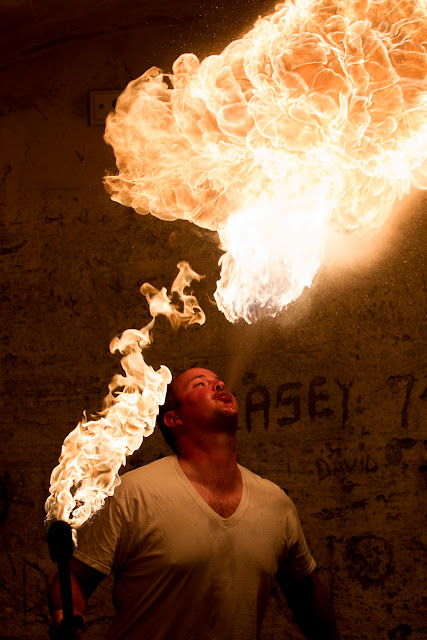 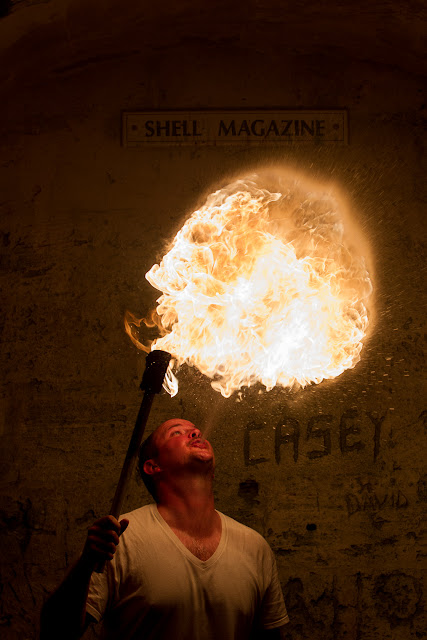 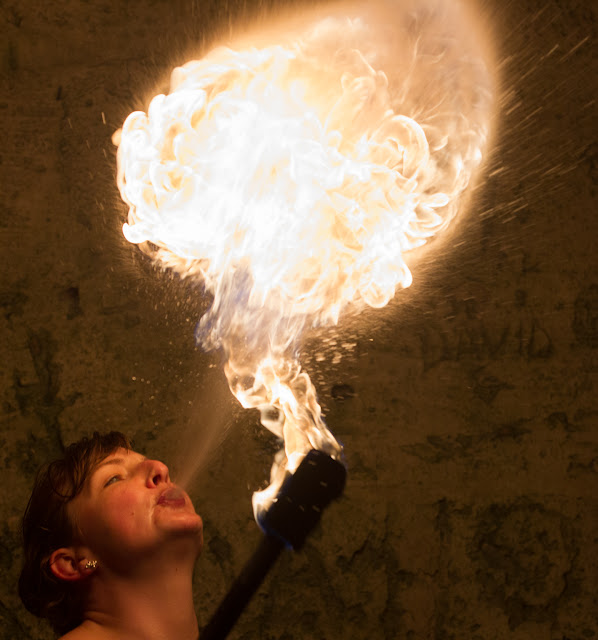 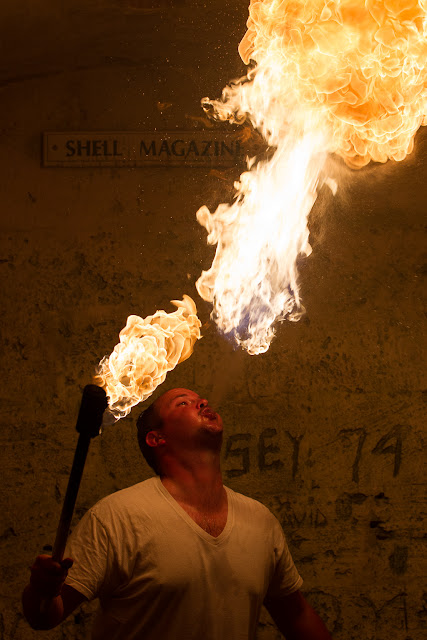 FIRE DANCE
I dont know what to call this, so I'm naming it fire dance.  The dance was performed by Laura Lyons.  She used her professional fire entertaining equipment, which is some absorbent material attached to a metal frame and soaked in lighter fluid. 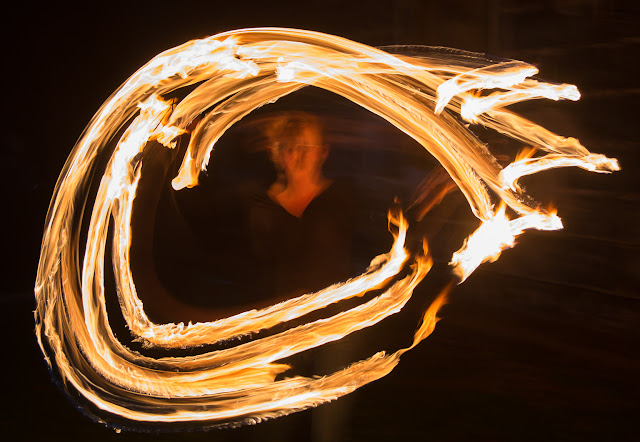 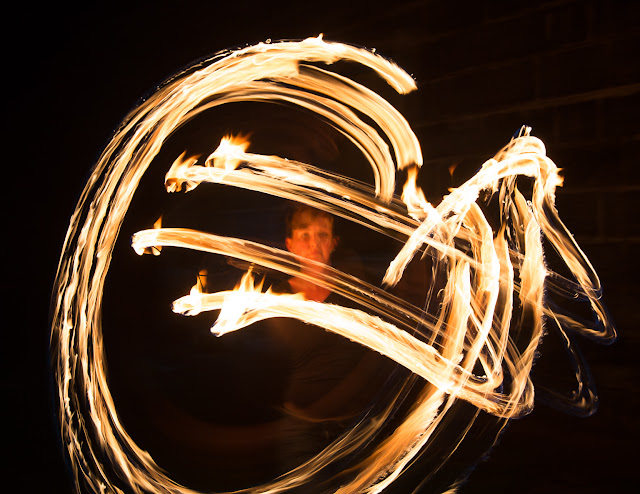 We ended the evening with some more fire spinning.  This time outside on the fort roof. 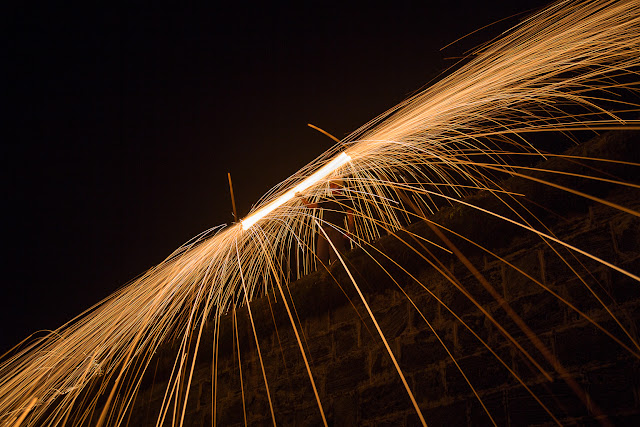 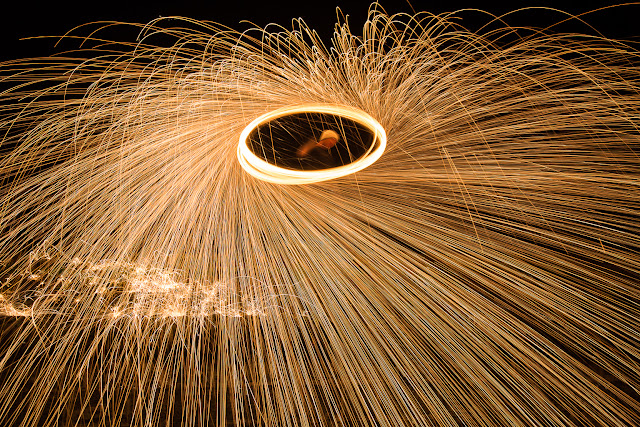 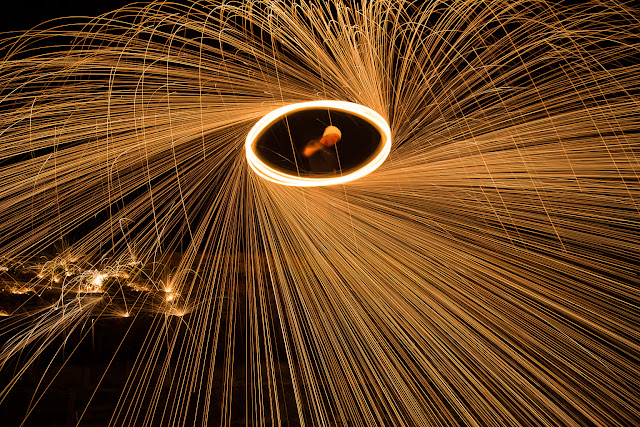 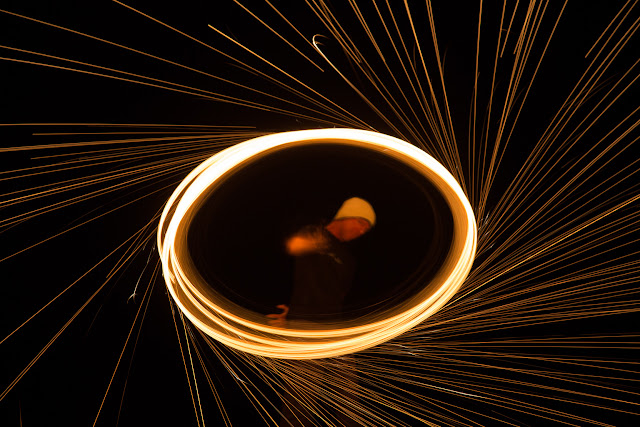 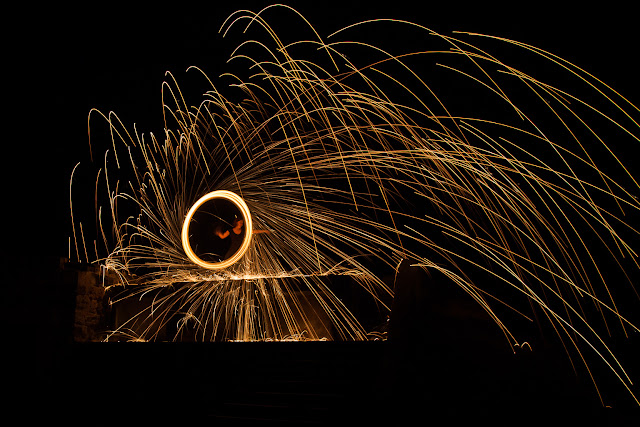 On Thursday we met at Horseshoe Bay to experiment with some more techniques.  The results that we were looking for didn't quite work out, however, while we were there Jack did some more fire spinning from on top of the large rock to the right of the beach. 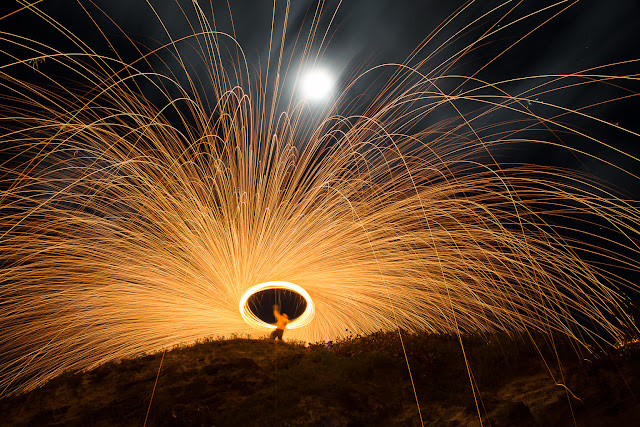 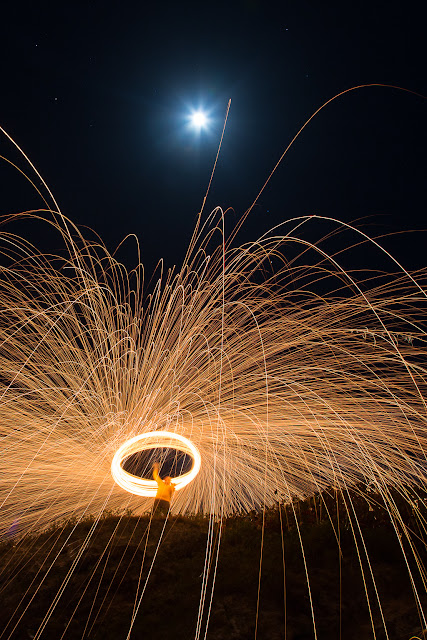 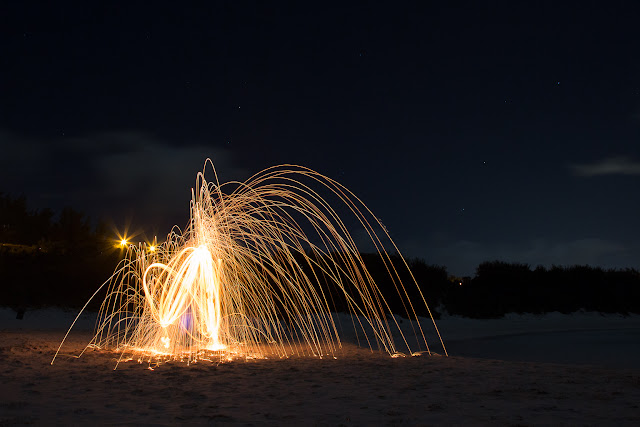